skip to main | skip to sidebar

Most checked out books of 2010 - NY Public Library

Any librarians wondering what manga series are worth investing in should check out the Young Adult catogory of the highest circ books for 2010 for the New York Public Library. The list includes Naruto, Bleach, One Piece and Dragon Ball Z so Viz must be very happy. On the list for children, the very charming Babymouse makes her mark.
Posted by Animelibrarian at 9:39 PM 14 comments:

I am currently reading Red River by Chie Shinohara, an older release of Viz which has a few volumes that have fallen out of print. The plot involves Yuri, a Japanese school girl, pulled into the past who becomes involved with Mursili II of the ancient Hittite Empire. Sounded like Fushigi Yugi, one of my least favorite manga series. So I avoided Red River for years, but a Viz sale on Right Stuf and the fear that the whole series would go out of print pushed me to finally buy all 28 volumes.

I am on volume 14 and have to say, I was completely wrong in seeing Red River as another Fushugi Yugi. Red River does have the same plot contrivance of a Japanese school girl transported to a new world, but Yuri's modern sensibilities are used to play up the differences between our time and the Bronze Age. The plot focuses on the politics of the Hittite Kingdom and the often murderous schemes of the Queen dowager. Yuri is a compelling heroine and her maturation into a formidable woman is completely believable.

The Art of Osamu Tezuka - review 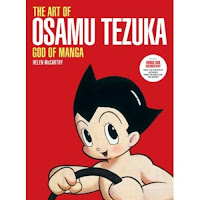 The Art of Osamu Tezuka: God of Manga by Helen McCarthy is a lavishly illustrated look at a man who revolutionized the manga and anime industries. The book details how Tezuka built a manga and anime empire and how his cinematic style influenced generations of artists and creators.

I had great fun reading about the manga and anime series created by Tezuka and Ms. McCarthy enthusiasm for Tezuka's work is contagious. My only complaint is that so few of the series discussed have been translated into English, though the wonderful work by Vertical gives me some hope that we will see more of these translated into English. My personal wish list - Rainbow Parakeet and Barbara!

Be sure to check out the fascinating bonus DVD that is included with the book which looks at the daily life of Osamu Tezuka. All in all a highly recommended library purchase and a must have for any anime and manga fan.
Posted by Animelibrarian at 3:45 PM 1 comment:

Preparing a session on intellectual property, and am amazed at how utterly different Japan is from the U.S. in it's approach. I suppose it's a cultural quirk that makes piracy shameful but doujinshi acceptable, even encouraged. Speculating if we could be like them is futile, but clearly something has to give somewhere. The current copyright environment is toxic; all sides are guilty, and everyone loses. Companies harass the creative and legitimate, consumers make like thieves and drive businesses into oblivion.

Information isn't free, but people want it to be. Yet if it's free, who will bother to make it, or make it good? And when culture is bound and protected from change or use, it becomes a sterile artifact. How ridiculous that the remixing and recycling of culture ends with the Great Depression. Death + 70 years, the current time of copyright protection, is far beyond the original idea and intent of the law. But then, consumers sure aren't invited to the White House for secret meetings. (here) Not many deep-pocket lobbyists for less copyright.

The issue is complex and murky. What is clear is that our present is unworkable, and our future unsustainable.
Posted by Animelibrarian at 12:43 PM 3 comments:

Back again, sort of

I've resurrected the old anime blog my sister and I did a year ago. In the class I am co-teaching, there is an assignement to do blogging on various topics. A lot of the student blogs are really interesting; thoughtful, funny, well-written. Wanted to leave some comments, since nothing is worse than a blog nobody reads (right, Liz?) ^o^

So, if any anime fans stumble in, pardon any How We Know class stuff. And for any students, I hope you like anime, manga, and video games!
Posted by Animelibrarian at 3:31 PM 1 comment:

Not Your Father's Berserk

Berserk the anime was a huge hit among US fans. Uber dark and violent, the series hit just the right chord with older shonen viewers. As a fansub, it was instrumental in the formation of FIU's anime club at the north campus. It still has impact today.

I'm watching the series for the 3rd time, the first on DVD. The improved quality is rather surprising. The VHS fansub was dark and murky; by contrast the DVD is so bright in parts it seems seems positively cheery. Still, it has the same harrowing, bleak attraction as ever. My 17 year old son is captivated (he's been waiting years to get Mom's OK for viewing), and so am I. And yet, the anime is so much less than the manga.


Don't get me wrong. The anime is great, but the singularity that makes it strong also weakens. In a 25 episode series on what was then an unfinished, 9 year manga (It's 21 years old now, and still not finished), something has to give. Various characters and themes were dropped to focus on the relationship between Gatts and Griffith. A lot of the humor that contrasted with the extreme violence was left out, with the aim of creating a dark and hopeless saga. It all works, of course, but if you think Berserk is only what you see in the anime, read the manga.

The manga has a lot you would never suspect from watching the series. There's Puck, an androgynous little fairy who accompanies Gatts, serving as conscience and counterpoint. There are a slew of fascinating secondary characters who sometimes threaten to upstage the main event. Miura, like the best of mangaka, breathes life into a wide variety of people, making even the most despicable interesting and sometimes even sympathetic. Although still looking good for an anime of it's time, the cartoon cannot compare with the intricate draftsmanship and composition of the printed page. The broader themes of the manga, Fate, and Man's place in a precarious and coldly uncaring world, are more fully developed in the longer telling of the comic.


Finally, and most surprisingly in this bleakest of all worlds, there is Hope. It's a startling thing to encounter after the anime, and there isn't much of it. But it's there, and all the more luminous for the darkness that surrounds it.


Seeing Berserk the anime is like reading The Hobbit. It's a tiny piece of a much vaster world. If you loved the anime Berserk, or if you didn't, you should try the manga; it's an altogether different, and more rewarding, experience.
Posted by Animelibrarian at 1:10 PM 18 comments: 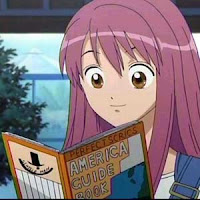 Like everything else at Jinbocho, we're a day late. Never mind. Happy 4th!

To celebrate, we'll look at some anime that have America, or Americans, starting with Kaleidostar.

Kaleidostar is the charming story of a girl who runs off to join the circus, or, in this case, Kaleido Stage, a sort of American Cirque du Soleil. Sora Naegino's first impression of the US.. (L.A., by the look of it) is a dizzying succession of crime, cops, and very large, very nice people. One of the cops that helps her out becomes her first fan and driver for a tryout with the troupe. Always interesting to see yourself as others see you.
Posted by Animelibrarian at 2:25 PM No comments:

Animelibrarian
Jinbocho is the joint blog of a brother and sister anime team. Both are librarians in sunny South Florida. Obsessed with anime since 1997, the two present various programs and workshops for children, teens, adults, and library staff. But it’s more than a job, as (too) much time outside of work is spent watching anime, reading manga, and playing games on the Wii, DS, PS2, PS3, Xbox 360, and PC. Jinbocho is also the bookseller’s district featured in the delightful anime, Read or Die. One of us has been there, and the other has not. Guess which one is jealous and bitter?